Private Transfer from Bucharest to Ruse 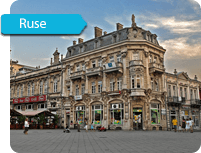 The easiest way to get from Bucharest to Ruse is to book a taxi from AroundBulgaria.com. The private transfer Bucharest – Ruse will save you money from renting a car, navigating on the local roads, thinking about parking and everything else.

We offer a convenient shuttle service to the airport or hotel, as well as a taxi from Bucharest to Ruse. Why you need our services:

How to Book a Transfer from Bucharest – Ruse

Send your requirements using the form below

We will send you an estimate and confirm details

Book a Transfer in Bucharest by filling the form below

The town of Ruse is located on the highest right bank of the Danube River. It is one of the largest cities in the country – an important cultural, commercial and industrial center.

The proximity of the Danube River has always been of great importance for the development of the city from ancient times to the present day. Here in the 1st century AD The Roman military camp was founded, named Sexaginta Priestis, the “Port of the Sixty Ships.” From the sixteenth century the town was known by its Ottoman name – Ruschuk. During the Ottoman rule, Rousse was one of the main cities of the Ottoman Empire, which reflected on its economic and cultural development.

Ruse is the first in many ways – the first railway station in Bulgaria is being built here, a modern printing house is being opened, a newspaper is being founded, the city is also the seat of numerous consulates.